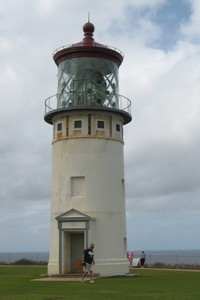 Kilauea Wildlife Refuge on Kilauea Point is open daily 10 AM to 4 PM, and closed on federal holidays. Entry fee is $5 for adults 16 and older. Free for children under 16, and free for all on Lighthouse Day (the first Saturday in May) and Nene Awareness Day (the last Saturday in September).

The wind that blows in Kilauea is named Waimio (fast-moving water), and it buffets your car as you drive down to the lower parking lot. As you get out of the car, the wind grabs your hat and sails it across the parking lot. You forget about the hat as you take in the famous bird cliffs rising across the bay. Covered with the white flecks of nesting birds, the cliffs are layered like a huge chocolate Napoleon. A red-footed booby turns overhead on wings black against the sky.

The walk up the hill takes you past the Visitor Center, which has a great selection of memoirs and educational resources, including Hawaiian bird, animal, flower and fish coloring books. 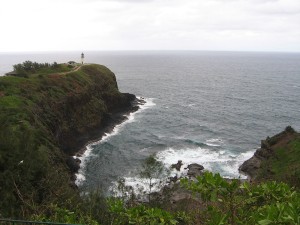 Birds nest on the cliffs and wheel about below – looking down from the upper parking lot.

You look down a hundred foot cliff to surf below, pounding on black rocks swirled in the ancient rivers of lava that formed here five million years ago. The wind blows fiercely, and bold black-winged white birds ride it like a stallion, pointed wing tips working.

Far below, white foam swells in and out of a great sea-cave. In Europe we marvel at the great cathedrals and the ancient roads. Here the marvels are what wind and rain have carved from the layered shapes of frozen lava, in a vast Volcano Moderne architecture of earth. Here the carved corbels are fantastic gestures of stone worn into form one grain at a time by this fierce and predatory wind; here the great beams are arches of rock worked by the salt spray of centuries.

You walk towards the lighthouse, a squat stumpy tower of plastered stone. A red ball and spire top the lens casing like a Moscovian cherry, and black and white shearwaters curve away, defeated by the spike.

A little island rises off Lighthouse Point like a fifty-layer cake of chocolate lava. On top like strange frosting there is a layer of red dirt and green grass, clinging to the black lava. Birds stand on the jagged shapes of black stone in assemblies and conventions, feeling the wind with uplifted wings, leaping sometimes up into it. 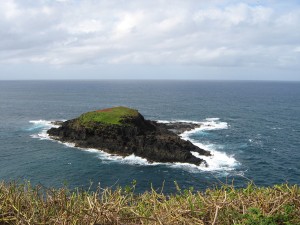 A trio of white-tailed tropic birds with long white tail-streamers get caught in a freshet of wind blowing between headland and island. They scream, flapping furiously, tumbled over and over by the wind. It is a huge and glorious game in the vast space of rushing air. Their antics carry them right over-head and for a moment you see them clearly – white birds bright as stars, with apricot blush under their wings, and their long white tail feathers like string ties tracking the wind behind them. Then a gust whisks them screaming and somersaulting away across the water.

Overhead like a wind shadow sails a huge black bird with a white head and curved, drooping wings – the Great Frigate Bird, seven feet from wing tip to wing tip. He curves towards the cliff. Following his trajectory, your eye finds a jagged black hole broken in the lava wall of the cliff across the little bay – thirty feet up a sheer rock face above pounding waves. What lies within? Pirate treasure? The biological jewel of a new cave-dwelling species? It is a secret of Bird Land, not for us to know. 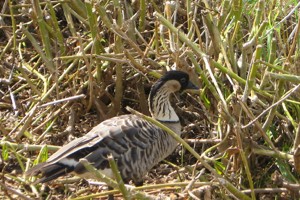 We can’t tour the Bird Cave, but the lighthouse will be open next year.  It is being restored for the lighthouse’s upcoming 100th birthday party in 2013. However, some secrets will soon be revealed. As part of National Wildlife Refuge Week the second week in October, free hikes to spectacular vantage points, accessible only to guided visitors, will be provided on different days by a local historian, a forest ranger and a seabird biologist.

Check out our next blog about how the northernmost point of Kauai came to have the westernmost lighthouse in America.

The Prince Course will reopen for play on March 1 at Kauai’s Princeville at Hanalei  resort under the management of Montage Golf.

Montage Golf, which will also oversee the Princeville Golf Club and Adventure Center, is a division of Montage Hotels & Resorts. The Laguna Beach, Calif.-based company purchased 122 acres of land in the Princeville at Hanalei resort in late 2007 for the site of a future luxury resort.

“Montage has redefined ‘comfortable luxury’ in the hospitality industry and brings a new level of prestige and cachet to Princeville and Hawaii’s golf industry,” Princeville’s master developer, Jeff Stone, said in a statement. “They are second to none when it comes to delivering exclusive experiences, and their expertise in building signature outdoor adventure programs is a natural fit for our existing Princeville Ranch Adventures and the North Shore of Kauai.

Readers should understand the perspective about Honolulu.  Here are some thoughts:

So, in conclusion, the State of Hawaii, excluding Honolulu, is truly a paradise with islands unique in character to fit your plans and dreams.

Top female Kauai surfer, Malia Manuel, joins the Association of Surfing Professionals (ASP) world tour, the elite of the elite.  Malia learned to surf at 3 years of age riding her father’s (Selso) shoulders, and cut her skills at the primo surf spot, Hanalei Bay in Princeville. She is one of 4 rookies on the ASP Women’s Tour, the most prestigious group riding the waves.

Her first contest is the Roxy Pro at Australia’s famed Gold Coast.  Good luck to yet another surfing super star from Kauai. 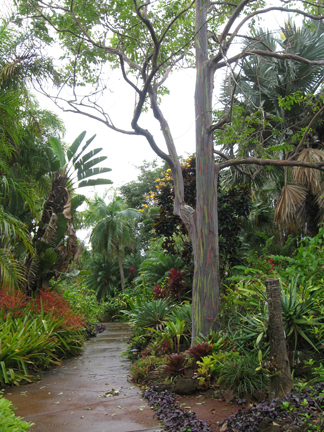 In the parking lot of the National Tropical Botanical Gardens, lined with tufted princess palms, an amazing agave stands guard, like a dragon springing from its bed of impatiens. A Royal Poinciana tree, its great peapods in a dense tangle of branches, rises from a rock-walled island.  Amid the tropical profusion, orange globes bulge among the green leaves of a tangerine tree.

As you enter the grounds from the parking lot, you seem at first to be caught in the hedge that grew up around Sleeping Beauty’s castle. Impenetrable bamboos block the light. A spectacular rainbow eucalyptus rises to the blue sky, trunk streaked in lime green and rust and gray and brown. An apologetic little path sidles between the great stalks of ginger.

The sidewalk through the enchanted forest hedge is imprinted with ferns and leaves. Along the walk is a chorus line of tropical beauties. Bright red ginger waves overhead, and waffle plants make purple-green pools under the salmon anthuriums, their leaves like baby elephants’ ears. Clouds of miniature orange-red orchids hover by an ixora bush full of tiny yellow stars.

At the inner edge of the forest hedge, five-petaled vinca blossoms, purple and white, catch your eye as you approach the main building, painted in natural hues of green, brown and red-dirt red. The sidewalk parts around a ponytail palm, switching its ponytail in the breeze as enthusiastically as a girl. An austere sign below informs us that it may look like a pony-tail, but it’s not a palm at all – actually it is an agave. 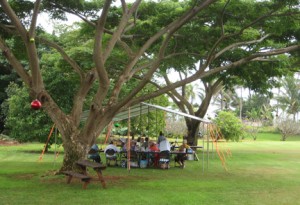 Kauai Women Artists hold art classes under the trees in the big meadow.

And then the garden vista opens out. A great tree ahead shades the entrance to the park on your left. Below the tree is an open meadow. More trees hover around its edge, and the sun sparkles in the open amphitheater at its center. Huge, colorful Christmas balls hang out of the big koa trees that line the park, from long, near-invisible lengths of fish-line.

Turning left and passing the little gazebo in rust and green and brown, you stroll down a shallow incline into the park. Beyond the meadow runs the road, where quiet cars tiptoe gently by. And past that, a villa’s roof rises, brown on its plaster columns against the gray blue ocean.

As you pass through the hedge, you notice the bush to your left is full of golden-orange berries like miniature pumpkins, drying to shriveled crimson. The five-petaled flowers, each petal pointed like an elf’s hat, are delicate shades of cream and creamy orange.

Trees spread out to each side of you, cradling the meadow in their embrace. You can almost see the food booths and hear the music of a hundred festivals that have happened here. The memories of little children scamper laughing across the green. 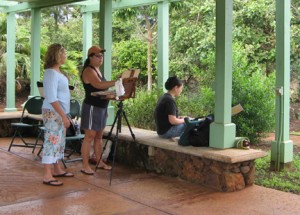 Come to Poipu. Come to the National Tropical Botanical Garden! Plant hospital to the world, artist’s place of dreams – this is the display window of Kauai. Try down by the pond – the water-lilies won’t mind. Come sit with us in the sunshine, they rustle, and just be for a little while …. See you down there!