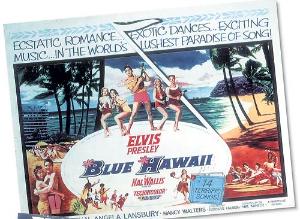 Kauai couldn’t help falling in love with Elvis Presley 50 years ago when the release of “Blue Hawaii,” the first major motion picture depicting the Garden Isle as itself, helped it earn its own starring role among world-class destinations.

Hundreds of fans are expected to turn out Saturday for “Kauai Remembers Blue Hawaii,” a commemorative event sponsored by the Kauai Visitors Bureau and theCountyofKauai. The event at the Kauai Marriott Resort at Kala­paki Beach will celebrate the anniversary and the effect the movie and Presley had on isle tourism. It will feature an Elvis impersonator, a screening of the movie and a tribute to the late Grace Guslander, the hotelier who ran Coco Palms Resort, where the singer held his cinematic wedding to co-star Joan Blackman at the coconut tree-framed lagoon.

“We’re expecting 300 people, but the event could draw 500 or more,” said Sue Kanoho, Kauai Visitors Bureau executive director. “This is bigger than I thought. As I talk to people, they keep coming up with more stories about ‘Blue Hawaii’ or Elvis. Our visitors are really excited, too.”

“Blue Hawaii,” the singer’s eighth movie and his biggest commercial success, was filmed on Oahu and Kauai in 1961 and debuted on Kauai in 1962. The soundtrack spent 79 weeks on Billboard’s pop album chart, including 20 weeks in the No. 1 spot.Kauai’s Coco Palms was immortalized in the film’s final 20 minutes when Presley and Blackman ride to their wedding in a flower-filled, double-hulled canoe.

While Kauai has been a film location for about 60 major movies and TV shows, Kanoho said that filmmakers typically have used its natural beauty to portray other locations. “South Pacific,” “Raiders of the Lost Ark,” “Jurassic Park, “The Thorn Birds,” “Six Days, Seven Nights,” “Tropic Thunder,” “Avatar” and “Pirates of the Caribbean: On Stranger Tide” are among the films that disguised Kauai, she said.

“‘Blue Hawaii’ is that rare exception when a major movie directly associated Kauai with the incredible tropical splendor that audiences were seeing on screen,” Kanoho said. “Elvis Presley fans everywhere were suddenly aware of this beautiful paradise, and they wanted to come and see Kauai for themselves.”

Princeville is increasingly seen as the go-to neighborhood for both property purchase and vacations, and for good reason. 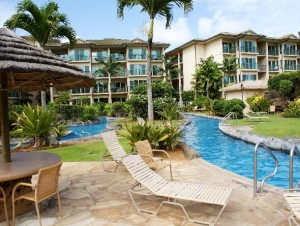