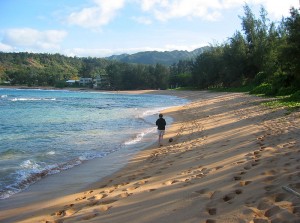 According to Business Insider, Hawaii has earned the title of happiest state in America for the 4th year in a row, according to the annual Gallup-Healthways Well-Being Index.

In general, state-level scores remained consistent with the past five years of data. Western and Midwestern states ranked high on the wellbeing index, and Southern states ranking near the bottom, with West Virginia coming in last. 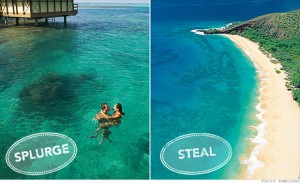 CNN recently compared beautiful honeymoon spots based on their costs.

Filled with palm trees, waterfalls and picture-perfect beaches, Tahiti — officially known as French Polynesia — is the dream tropical destination for many honeymooners. Yet the airfare alone is enough to bust anyone’s travel budget.

For less money — and less travel time — honeymooners can visit the Hawaiian islands where they will enjoy similar surroundings and activities, including surfing, snorkeling and even Polynesian entertainment.

The Hawaii Land use Commission has approved Grove Farm’s request to designate 11,000 acres on Kauai as important agricultural lands, the majority of which will be used for growing biofuels.

The Garden Island newspaper reports the Land Use Commission (LUC) gave its unanimous approval on 2-8-2013 to Grove Farm to preserve the land – 10,303 acres near Lihue and 746 acres near Koloa – for ranching and farming biomass crops such as grasses and eucalyptus trees.

Grove Farm, which is owned by AOL founder Steve Case, plans to lease the 10,303 acres near Lihue to Hawaii BioEnergy LLC, a partnership that includes Grove Farm, Kamehameha Schools, and Maui Land & Pineapple to grow biofuels to sell to Hawaii Electric Co, a subsidiary of Hawaii Electric Industries Inc., to generate electricity on Oahu.

Total nonstop air seat capacity to Hawaii is forecast to grow 6.8 percent in 2013 from last year, and total scheduled capacity is expected to exceed 10.7 million seats, which would be a new record, the Hawaii Tourism Authority said Friday.

Total air seats from the Mainland to the Islands are expected to reach 7.1 million, the highest level since 2007, while international seats are projected to reach 3.6 million, their highest point since 2000, based on flights appearing in the OAG and Diio airline schedules as of last month, the HTA said.

Total seat capacity from the East Coast, Japan, Other Asia and Oceania markets are forecast to grow in the double digits, with Japan adding more seats than any other market.

Total air seats from Japan are expected to jump 14.5 percent to more than 2.1 million, driven by an increase in service by carriers flying from Tokyo and Osaka, including Korean Air’s flights from Tokyo-Narita launching next month. The last time the total seat count from Japan exceeded the 2 million mark was in 2001, the HTA said.

Australia and New Zealand, which make up the Oceania market, are the fastest-growing market to Hawaii, with air seats projected to grow by 41.5 percent to more than 397,000 in 2013. They will be driven by the launch of new routes, including Hawaiian Airlines’ flights from Auckland, New Zealand, to Honolulu that launch in March.

The Other Asia market, which includes South Korea, China and Taiwan, is expected to see 18.1 percent growth in total air seats this year to nearly 482,000, which would be a 12-year high, the HTA said.

For the Mainland, Hawaii’s single largest market, air seats from East Coast cities are forecast to grow 10.8 percent to nearly 840,000, while West Coast seats are projected to increase 2.4 percent to nearly 6.3 million.

Canada is the only market that is expected to see fewer air seats this year — a projected 2 percent decline to about 357,000.